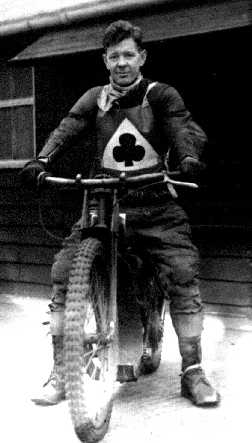 There is a strong case to argue that Jack Parker, veteran of over 25 seasons in top line speedway was the greatest rider in the sport's long history . Like racing driver Stirling Moss , he was the most famous, popular and dominant competitor of his era but never added his name to the list of world champions. An indictment against the quirky nature of the title if ever there was one!

Parker, born in Birmingham in 1907, certainly didn't look like a professional sportsman, the craggy ,pipe smoking, often stern face, brylcream-waved hair and (in later years) rimless glasses made him look more like a business man or bank manager than someone going wheel to wheel, elbow to elbow with people half his age on a motorcycle with no brakes! He was no glamour boy in the fashion of Ronnie Moore or Peter Craven but he gathered legions of fans and throughout the 30s and 40s could lay claim to being England's top rider without any doubt. And he knew it. He knew how good he was and didn't care to let false modesty cloud his opinion. When once asked in an interview who he considered the greatest rider of all time was, he nominated himself. And meant it.And the lack of a world title irked him, much as Moss admitted his own frustration at the same situation some years later. But as prodigious speedway reporter Basil Story once wrote of Jack "the man had no equal".

When dirt track racing came to Britain in early 1928 ,young Parker was already a successful trials rider for his employers BSA. He was intending to compete in Wales on the day his bosses commanded him to travel across to High Beech to take a look at the newly introduced sport, in case there was something afoot they they really should get involved in. He arrived, planning rather grudgingly to observe and report back but was talked into stripping the road equipment from his bike and having a bash by organizer Jack Hill-Bailey. His display of natural easy speed attracted the attention of the promoter who was about to launch the sport at Wimbledon. A match race was offered against Australian star Vic Huxley and Parker was guaranteed 20 win or lose. This was a fortune compared to his regular week's wage so he accepted and from that day until his retirement in 1954 he more or less lived and breathed speedway. From his early days at Coventry through to the pre war years at Southampton, he was inevitably the team captain, a position he maintained after the war at Belle Vue, however he clung to the ideal of being the sort of talented amateur that the British sporting public has always warmed to. He always had businesses running alongside his racing commitments so refused to accept that he was actually a professional speedway rider - and as if to prove it he would take little apparent interest in the bikes he rode. Theory had it that he could win on any heap of junk that lasted the course. Unlike many contemporaries ,Vic Duggan a case in point, who were very particular about their machines, Jack just got on and rode, and won, again and again.

In the early days there were no teams, the whole sport was a series of individual competitions and match races between the newly emerging stars-most of which were 'imported' from Australia or the USA where similar events had already become established . He maintained a liking for such match racing through his long career and by 1931 had beaten the formidable Huxley to win the British championship - then run on match race lines . After the war the Golden Helmet series of match races was inaugurated and became known as 'Parkers Pension fund" . He remained it total control of the competition from early 1947 until well into 1950 at which point he was well into his forties and had beaten off 19 separate challenges. 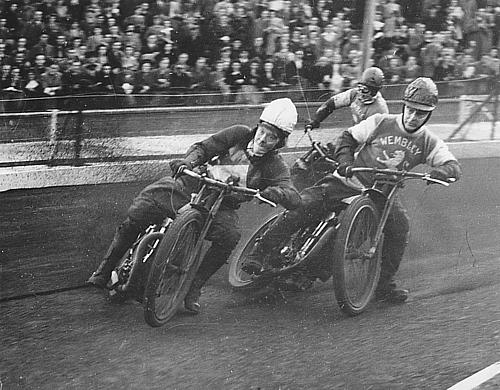 Such one-on-one racing was of course devoid of any kind of team tactics, the sort of thing that Parker hinted he would be ganged-up on when the chips were down. His belief was that other star names would make some sort of behind the scenes arrangement to take him out of the running, if not actually by dirty riding, then by working together to block him. He certainly had a large ego and huge self-belief so it would have suited him to justify any defeat in this way. He stated more than once that there was no-one at all who he could not beat one-on-one and the match racing supported that claim, but that if three of them were all gunning for him in the same race , as might be the case in a world championship meeting, he had no chance. In seven world final appearances he came closest to success in 1949 as runner up to Tommy Price but like so many others the war got in the way just as he was reaching his absolute peak. If world finals had run from 1939 to 1946 who knows how many he might have won. He did with the 1934 Star championship which was trumpeted early on as the "worlds championship' a title that mysteriously got dropped prior to the final rounds!

During the war he made appearences along with many other riders in the regular Belle Vue meetings and later toured with a team formed by ENSA although his form in these meetings was not great. Others recall him saying that he could beat any of the riders out there with his eyes closed but as it was just for show, not really important and he was getting paid whatever the result, he couldn't really be bothered !

As a team rider he capitained England numerous times during his 96 caps for his country and often rode with his younger brother Norman in a formidable almost telepathic manner that foxed the best that other countries could throw at them. In the league as captain of the mighty Belle View his side suffered frustration at the hands of the even mightier Wembley squad and had to make to with being five times runners up to the Londoners, although they won three National Trophies and the ACU cup - major titles of the era..

Down under , Parker was as big a star as back home, winning the 50-51 Australian Championships but it was there in 1953 that injury finally caught up with him - but not in a speedway crash. Jack had been racing  a speedcar (in this attached photo Parker is on the left), which outside Australia would be known as a Midget, on the small ovals for fellow rider and promoter Frank Brewer. During a test run at the Sydney Royale stadium in February a momentary lapse of concentration saw the Parker's V8 powered car pitch into a series of rolls and end up buried in the fence with the driver still behind the wheel, but seriously injured. For a while he was expected to die and remained critical for some time afterwards. The inadequate helmet of the times left him with a fractured skull as well as a badly broken arm and scalding from the burst radiator. In time he recovered and returned for a final season at Hyde road but his edge had finally been blunted , hardly surprising really for a man approaching 50 in such a physical sport!

He remained involved with the sport for years in various capacities and died almost ignored by the national press in 1990 at the age of 84. If the current system of honors (knighthoods, OBEs etc) had been in operation in the 40s or 50s there is little doubt he would have received some sort of official recognition, but sporting knights were much less common in those days....

But what a rider, what a star! Jack Parker.

My thanks to Brian Darby for information on the speedcar crash.