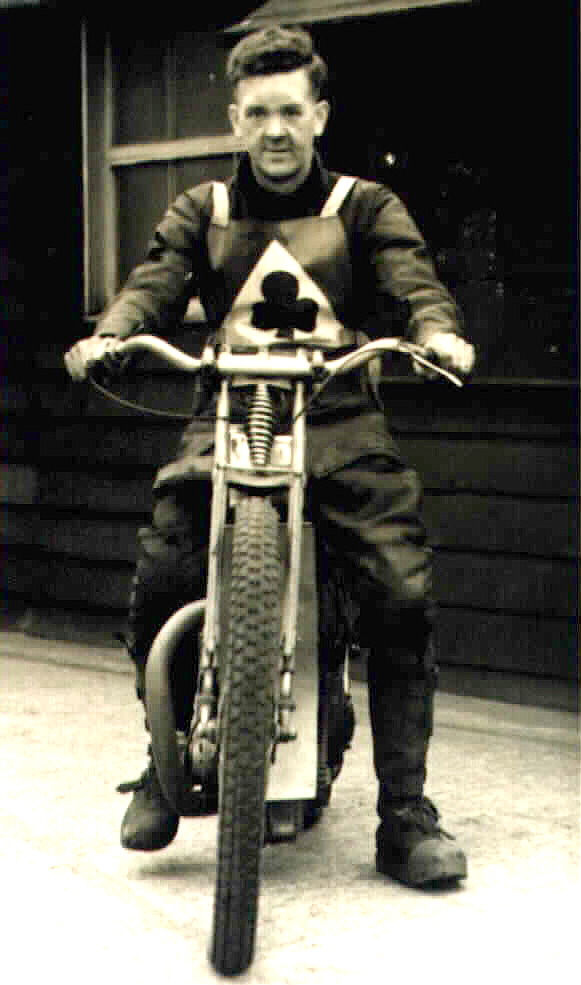 In fading old photos of the great Belle Vue teams of the 30s and 40s an almost ever present rather stern face glares out of the line up among the changing line up of stars . Even more than the firey Frank Varey or the legendary Jack Parker ; quiet, deep thinking, unsmiling Eric Langton was 'Mr Belle Vue' through almost his entire career. Born in Leeds in 1907 of well heeled parents, Langton's competition career began before the start of British speedway as a talented road racer and trials rider. Like his eternal rival Jack Parker, he adapted quickly to the new dirt track style and soon became one of the top English stars of the early years, at a time when home grown talent was hard to find amid the Aussie and American heroes. Aside from riding talent he and brother Oliver posessed a techanical sympathy, understanding and vision that shaped the sport around them. Eric practically invented the foot-forward style when almost everyone was leg-trailing. At a time when numerous makes of bike were seen on the dirt tracks, the whole matter of what most suited the sport was open to conjecture and inspired forsight. The Langton's posessed plenty of the latter and the mechanical know-how to make their ideas work. They pioneered the effective us of sprung forks when most rivals ran rigid, and flexable lightweight frames when established competiton specialists such as Rudge were adding tubes, and weight, to make their frames stiffer - the Langton method prooved to be the more effective and Rudge soon learnt from them.This innovavtive streak, coupled with firece determination and perserverance put Eric at the forefront of the sport untill his retirment in the late 40s, Olivers career however was to be somehwhat abbreviated. During the 20s the pair used a Bugatti with a cut down body to transport their bikes, later they moved on to an Alfa Romeo , then a Bentley and finally an Invicta . Exotic stuff but this was an era when riders could and did make huge amounts of money from speedway. Eric's debut was in 1928 at the original Belle Vue dog track in Kirkmanshulme Lane even before the famous Hyde Road stadium had been constructed . He went on to join and then captain Leeds before becoming a permanent fixture with the Belle Vue Aces at their legendary track. The Langton brothers soon gained wide experience of the sport not just in England, but as far afield as Australia and Argentina. At the time , off-season racing meant long sea voyages to spread the dirt track word around the globe. Bear in mind the difficulties and costs of such travel, post Wall Street Crash, and the fact most of the Belle Vue team could be tempted out to South America, expenses paid, indicates the percieved drawing power of the sport. With test matches established between the England and Australia teams, both Langtons found themselves regularly capped and Eric,beginning with the second test in Juy 1930 went on to represent his country for a record number of times. Arch rival Parker finally overhauled his total of caps but enjoyed a longer career strectching into the 1950s.

Eric married Mary in October 1934 after a short 2 month courtship and 2 days after the wedding the happy couple were on a boat heading for the customery Australian winter tour. Son Max was born in 1937. The family split there time between a house in Bradford and another in London where Eric had so many bookings that he required something more permanent than a hotel. They travelled around in the Invicta then a Ford V8 towing the bikes on a trailer, generally living well between regular bookings. Throughout the decade Eric maintainted a lofty position in the rider rankings but he was always somewhat uncomfortable in the kind of limelight that speedway riders enjoyed at the time.By nature a very serious,deep thinking man he declined to answer fan mail and left the chore to his wife! He assumed the captains role at Belle Vue in 1936 when Frank Varey announced his retirment....which in fact lasted just three months. Langton offered to stand down as captain once Frank had returned to the fold but Varey said he would rather Eric took the responsibility, thanks all the same. And so it was that Bele Vue gained it's long serving captain. In the same year the first 'official' World Championship was inaugurated at Wembley . It was a curious affair in hindsight, riders carried into the meeting a score of bonus points ammased in the qualifying rounds. It was possible that the rider who scored best of the night would still not be world champion because of his qualifying record - and such was the case, Bluey Wilkinson scored a maximum but Langton had more bonus points as did the tough Aussie Lionel Van Praag . The pair lined up for a match race but Eric broke the tapes. Van Praag declared he would not be champion by default and demanded a re-run.Langton gated ahead and led untill the final bend when leaving the smallest of gaps he was unable to hold the dashing Australian back and Lionel won by inches. Langton's near-miss on the first ever world final assumed a degree of controversy in later years. The deciding match race with 'Praagy' was 'fixed' between the pair, according to sources close to the action. It was alledged that Eric and Lionel agreed that whoever got to the first corner in front would go on to win and they would split the prize money between them. It almost worked out, Langton was ahead untill the final corner when he left a small gap which Van Praag couldn't resist going for. The first ever world final was won by about a wheel width and the Australian took the title.Langton looked particularly sour post race....He came within a single corner of winning the first ever world final at Wembley but never quite managed to take the sport's top individual honor.At the outbreak of war he retired and took no part in the wartime meetings at Belle Vue. It was a major surprise when he was brought out of retirment in 1946 by his old team amid a huge controversy about pooled riders - Eric being retired had been left out of the 'pool' of top talent which was being shared round the teams in an attempt to even up the competition. He suddenly became part of the Aces team and formed a partnership with the side's new Captain, Jack Parker. At the height of speedways popularity and importance, the Belle Vue side repeatedly pushed all-powerful Wembley for the league title and Langton and Parker appeared at the top of the rider averages as well as representing England in the revived test matches a decade and a half after they had made their test debuts.In fact Eric's average of well over 10 paced made him the national number 1. Unfortunatly off season surgery meant he didn't return to the track untill June. Eric's influence on the sport did not stop once he'd finally hung up the steel shoe shortly afterwards. Always something of a mechanical innvotor he built speedway bikes to his own design which saw widespread use all across the globe in the 1950s. In his later years he retired to live in Perth, Australia and retained an active interest in things mechanical well into his 90s, restoring vintage cars and motorcycles.

Langton said that to him, Jack Parker was the best speedway rider ever, the difference he said, was that Parker was very good at outsyching the opposition and would just push himself that little bit more in a crucial race. Eric himself would always ride just within his known limit irrespective, assuming that every race was the same as every other and it was better to play sightly safe and assume the other chap would soon over reach himself and come a cropper.. It was a sound policy ,but only as long as you had the skill of a Langton! Few others were as fast at full tilt as was in his self imposed cruise-mode. Parker himself said Langton probably had his tongue firmly in his cheek with this remark. The two were hardly close freinds, but then Eric , very much the cool professional, was not the sort of character who made freinds very readily, especially if they happened to be your most serious rival. Jack generally viewed himself as the top dog but would admit that Eric was the best of the rest,so to speak. There could hardly be a high accolade, in Jack's eyes at least! Eric died in the first year of the new century and his ashes have recntly been brought back to be scattered on the family grave in his beloved Yorkshire.